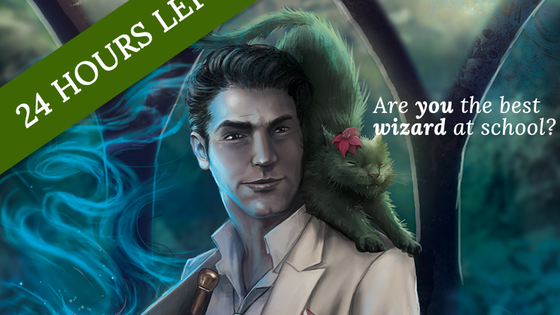 An exciting wizard school adventure board game for 2-5 players where you attend class, cast spells, & compete for the First House Cup!

Latest Updates from Our Project:

Today we're excited to announce a fun contest about your character for the New World Magischola House Rivalry game!

What did you do to land in detention?

One of the things we know about this game, whether as a larp, a tabletop, or a board game, is that people love detention. They want to do the pranks, the miscalculations, the shady things that get them sent to detention (where those somewhat lax Magischola profs always seem to let something catastrophic happen). So we want to know -- what did your character do to end up in detention? The winning entry -- with the most creative and outlandish magical mishap -- will be immortalized on the Detention card:

All you have to do to enter is this:

So, did you set a raging minotaur loose on campus? Turn your best friend into a squonk? Bring banned Dionysian Elixir to campus? Cheat on your ethics exam? CONFESS and you could win the $150 level tier in the Kickstarter.

The wackier the better! This isn't *mundane school!

We are 58% funded after one week of the campaign! That's great news! The even better news is that we have three weeks left to get the other 42%! We want to see this game brought to life as much as you do, so we're all in this magic boat together!

All of the Early Bird level pledges for the game and the magical creatures expansion are snapped up, as are the "Put Your Likeness in the Game" rewards. There are still opportunities to add your flair to the game with the "Design A Card" and "Name Something, Get the Credit" tiers, at $325 and $150 respectively. And here's a secret for our backers and their friends: at 12 noon EDT on Tuesday, Sept. 26, we will open three more "Put Your Likeness in the Game" rewards at $500. That means that you will have your photo of you (and your familiar if you desire) drawn by Dagmara and put in the base game as a playable character, complete with a special character ability that you can wreak magical havoc with! Our design team will work with you to create and test that ability. If you were hoping for that perk but didn't get it, or you know someone who wants it, let them know that it's going live Tuesday at noon and be ready to pledge quickly!

Over the weekend, Game Designer Dylan and his fiancée Melissa were at the Queen City Mischief & Magic Harry Potter party in Staunton. They ran the game 6 times for fans at the Dragon's Hoard game store. People of all ages were singing in Kokopelli's Choir, whispering in Obsidian Circle, and jinxing and counter-jinxing their rivals. Much fun was had!

The best way to help is to talk about how excited you are about the game! You can tell your friends personally, or send them a snap, or add a quick video about your wizard school dream to Your Story. There are some tools in Update #2 that you also can use to spruce up your social media and help get the word out.

We've gotten a couple reviews of the game in -- we'll post those in a new update on Thursday.

Until then -- stay magical!